There are different ways to manage virtual machines (VMs) running on KVM hypervisor. For example, virt-manager is a popular GUI-based front-end for VM management. However, if you would like to use KVM on a headless server, GUI-based solutions will not be ideal. In fact, you can create and manage KVM VMs purely from the command line using kvm command-line wrapper script. Alternatively, you can use virsh which is an easier-to-use command-line user interface for managing guest VMs. Underneath virsh, it communicates wtih libvirtdservice which can control several different hypervisors including KVM, Xen, QEMU, LXC and OpenVZ.

A command-line management interface such as virsh is also useful when you would like to “automate” the provisioning and management of VMs. Also, the fact that virsh supports multiple hypervisors means you can manage different hypervisors via the same virsh interface.

In this tutorial, I will demonstrate how to run KVM from the command line by using virsh on Debian or Ubuntu.

As a first step, verify that the host CPU is equipped with hardware virtualization extensions (e.g., Intel VT or AMD-V), which are required for KVM. The following command will do.

If the output does not contain vmx or svm flag, it means the host CPU does not have hardware virtualization support. Thus you cannot use KVM on the host. After verifying that the host CPU comes with vmx or svm, proceed to install KVM next.

For KVM, it is not required to run a 64-bit kernel on the KVM host, but generally it is recommended.

During installation, libvirtd group (or libvirt-qemu on Debian) will be created, and your userID will be automatically added to the group. This will allows you to manage VMs as a non-root regular user. You can verify that by using id command, which will show your group IDs:

If for some reason, libvirtd (or libvirt-qemu) is not found in your groupID list, you can manually add yourself to the group as follows.

At this point, you should be able to run virsh as a regular user. As a test, try the command below, which will show a list of available VMs (currently none). If you do not encounter a permission error, it means everything is okay so far.

Here is how to create and configure a Linux bridge br0 for bridged networking with KVM.

First, install a necessary package, and create a Linux bridge from the command line.

After disabling Network Manager, go ahead and configure Linux bridge br0 in /etc/network/interfaces as follows.

Restart network service, and verify that Linux bridge is configured successfully. If successful, br0 should be assigned the eth0’s DHCP IP address, and eth0 should not have any IP address assigned. 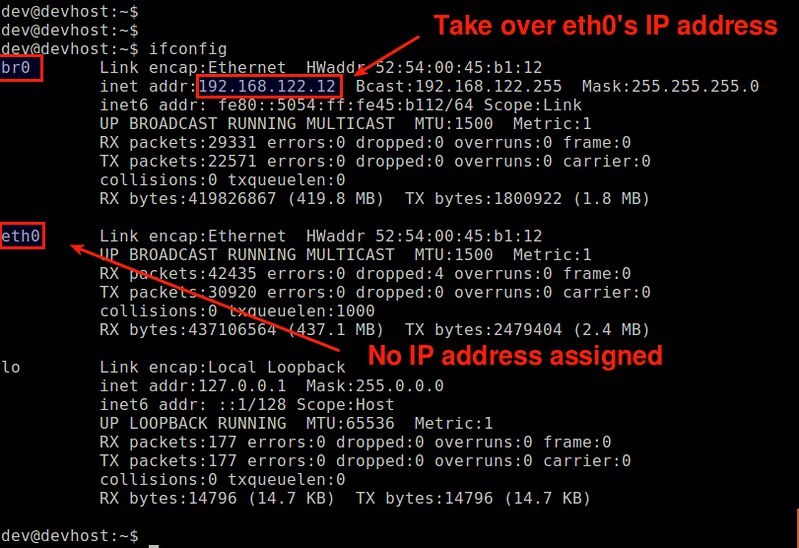 Step Four: Create a VM from the Command Line

The following is a sample domain XML file of a VM. You can customize it as needed.

The above domain XML file defines the following VM.

The UUID string inside <uuid></uuid> can be randomly generated. To get a random UUID, you can use uuidcommand-line tool.

Another way to create a domain XML file is to dump the domain information of an existing VM as follows.

Before starting a VM, you need to create its initial disk image. For that, you can use qemu-img command, which comes with qemu-kvm package you installed. The following command creates 10GB size empty disk image of qcow2 type:

The advantage of using “qcow2” (as opposed to “raw”) as a disk image format is that a “qcow2”-type disk image is not created as a full size (10GB) initially, but grows as the disk gets populated. So it is more space-efficient.

Now you are ready to start a VM using the domain XML file you created earlier. The following command will create a VM, and automatically start it.

NOTE: If you run the above command with an already created VM, it will wipe out the VM without warning. If you already created a VM, you can instead use the following command to just start the VM.

Verify that a new domain has been created and started successfully with:

Also, verify that the virtual interface for the VM (e.g., vnet0) is successfully added to the Linux bridge br0 that you created earlier.

To access the console of a running VM remotely, you can use any VNC client.

First, find out the VNC port number for the VM as follows.

In this example, the VNC port number for alice VM is 5900.

Then launch a VNC client, and connect to a VNC server running at <KVM-host-IP>:5900. In our example, the VM is supposed to boot into CentOS CD-ROM. 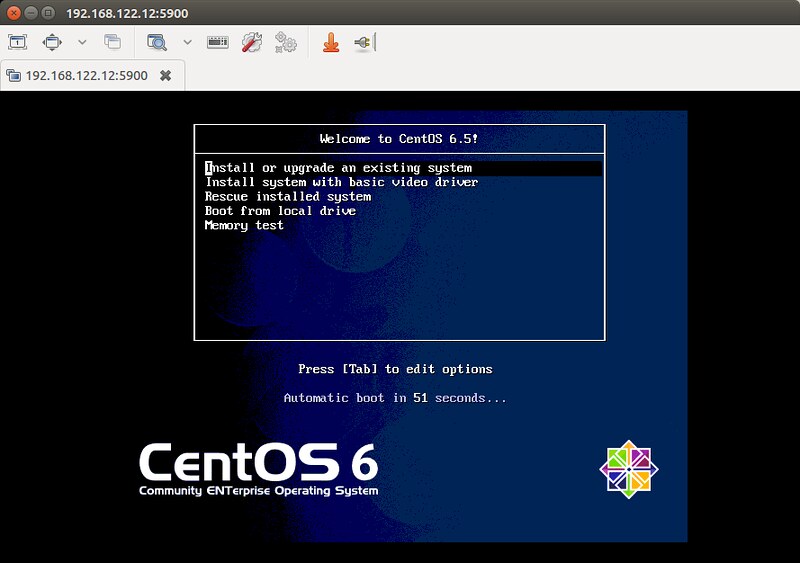 To create a new guest domain and start a VM:

To stop a VM and destroy a guest domain:

To shutdown a VM (without destroying a domain):

To suspend a VM:

To resume a suspended VM:

To autostart a VM upon host booting:

To get domain information of a VM:

To edit domain XML of a VM:

The above will invoke the domain XML file of the VM with a default text editor. Any change in the XML will automatically be validated by libvirt for correctness.

At the virsh prompt, you can use any virsh commands. 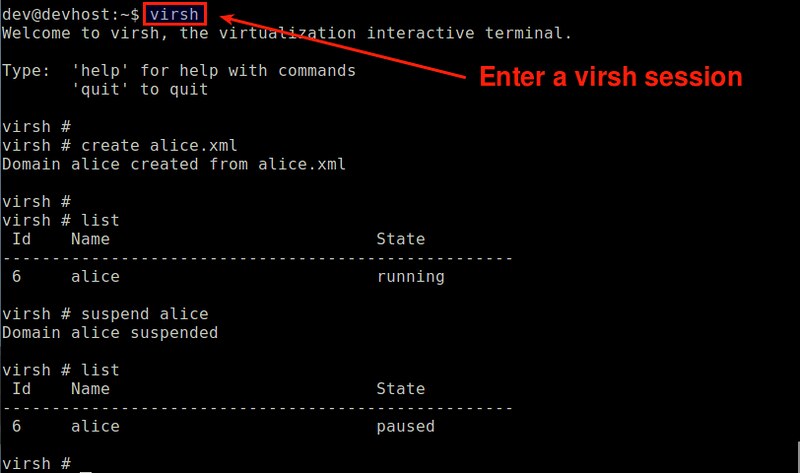 1. I am getting the error while trying to create a VM:

If kvm kernel module is not loaded, you must load it as follows.

The second solution is adding “–connect qemu:///system” argument to virsh command as follows. This argument may be needed when you are using more than one hypervisor (e.g., VMware, VirtualBox) on the server hardware.

2. I am getting the error while trying to access login console of my VM:

This error occurs because you did not define a console device in the VM’s XML file. Add the following inside the “device” section of the XML file.